It hopped up from the ditch by the roadside like a miniature kangaroo and landed three feet in front of the car. “No-o-o” I shouted, even though there was no one there to hear. The young woodpecker froze, giving me time to register its bright red cap, white belly and variegated black and white wings. Then it was gone, under the car. Glancing instinctively at the rear view mirror I saw no sign of a squashed woodpecker on the asphalt. A sense of relief flooded through my veins – the bird had made it.

As I turned onto the dirt road, I could still see the bird in front of me. Woodpeckers have a very characteristic way of hopping up tree trunks, using their powerful claws situated near the bottom of their torso. This makes it easier to keep their balance while hacking away high up in the trees. On the ground they stand upright and hop along in a rather laboured, almost comical way – for a bird.

I backed the car into the gravel driveway and closed the gates behind, giving no more thought to the woodpecker.

The next day, as I opened the gate after my morning walk, my stomach lurched when I saw  what had happened: 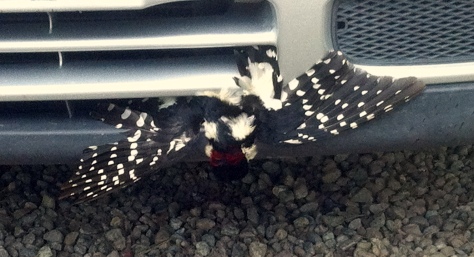 The woodpecker was there, speckled wings spread wide and red-capped head drooping, sucked into the car’s air intake. It had been there since yesterday. I just stopped in my tracks, not believing what had happened.  What if I had stopped right away and checked the car? Could I have saved it?  What now?

At least I could take a photograph of the poor bird so went to fetch my camera. Crouching down in the gravel, I thought I caught a little glimmer of life still in its eyes. But the broken neck revealed this as wishful thinking. I put on my gloves and held the opening of a white plastic bag over the woodpecker’s head, grasped round its neck and pulled gently. I expected it to be jammed hard in the air intake but the body slid out easily. The wings folded back automatically as the car released its grip on the bird. I noticed a red patch low down on its white belly. It was the same shade of bright red as the bird’s cap, not brown like dried blood. Lying there in the bag it looked peaceful, eyes tight shut. A not very dignified ending for a beautiful young woodpecker.

I slowly tied up the bag and fetched my spade to dig a hole down by the lake, where the woodpeckers hunt for grubs in the dead branches of the gnarled old oak trees.

* The great-spotted woodpecker (Dendrocopos Major) is the most common and widespread of the British woodpeckers. The woodpecker is 23–26 centimetres (9.1–10.2 in) long, with a 38–44 centimetres (15–17 in) wingspan. It has black and white plumage, a prominent oval-shaped white patch on each wing and a red patch under the tail. Males also have a red patch on the rear of the head. Juveniles can be identified by their red crown.